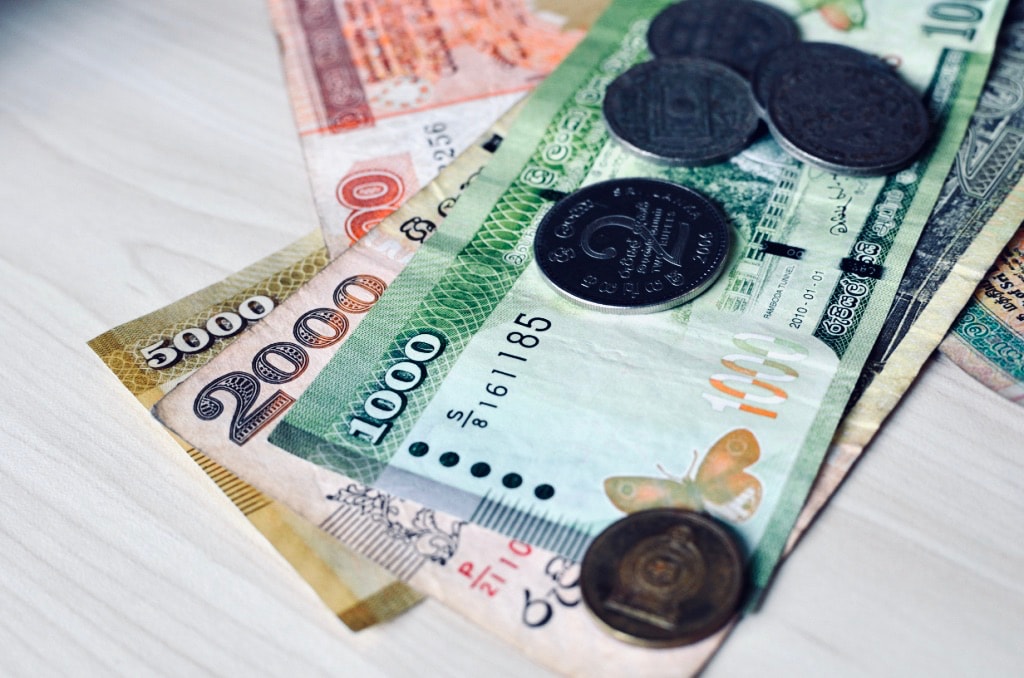 Since the unexpected shock of COVID-19, many countries across the world encountered serious economic challenges, on top of dealing with the health crisis. The Sri Lankan economy also took a severe hit due to the pandemic, resulting in a negative economic growth of 3.6% in 2020. A three-month lockdown imposed by the government during March-June to contain the impact of pandemic led to a significant drop of economic activity and loss of employment. While the economy rebounded gradually during the third and fourth quarters, contraction of the economic activities called for substantial government intervention. The Government intervened to restore the economy by providing some limited economic stimulus ranging from cash transfers to the poor and those who lost their jobs, to low interest working capital loans to businesses. The government further allocated a colossal amount of money to develop infrastructure, particularly expressways, claiming that such stimulus would assist growth to rebound in the medium term.

However, stimulus does not come for free. Government stimulus inevitably increases government expenditure. This does not imply that the Government should not provide stimulus, particularly during a global pandemic. Rather, stimulus should be carefully planned and targeted to ensure that it helps the economy to grow, while generating sufficient return on investment, distributing benefits to all segments of the population.

At the time COVID-19 hit, the Sri Lankan economy was grappling to fight many vulnerabilities caused by neglected structural issues over the last two decades. Out of those structural issues, most concerning ones were: falling tax revenue as a share of the GDP (the tax ratio), plunging export performance and high levels of public debt. These issues worsened with the pandemic as exports fell, tourism earnings plunged to zero for several months, and the fiscal deficit further expanded. As economic activities contracted, the Government provided cash transfers of Rs.76 billion in 2020 and many other financial assistances for the businesses, resulting in an increase of government expenditure. On the other hand, the Government revenue drastically dropped due to the contraction of economic activities and the tax cuts provided by the Government prior to the pandemic. As a result of that, in 2020, budget deficit reached double digit (11.1% of GDP) while the tax revenue to GDP ratio dropping to all time low of 8.4%.

Sri Lanka is therefore confronted with a policy paradox. On one hand, the Government is compelled to provide support to rebound economic activities either through stimulus or public spending. On the other hand, the budget deficit must be contained while managing the public debt. The solution to this paradox lies in raising tax revenue and focusing on targeted government spending, both of which unfortunately have been neglected for most periods of post-independent Sri Lanka.

In the recent past, Sri Lanka was identified as a country with an extremely low tax to GDP ratio. At the start of millennium, Sri Lanka’s tax revenue amounted to 14.5% of GDP and by 2019 it had further dropped down to 11.6%, indicating severe weaknesses of revenue mobilization. Low tax revenue was caused by low-income tax rates, failure to expand the tax net, and ad hoc tax concessions given to investors. In 2017, progressive efforts were made to address these issues and increase the direct taxation in Sri Lanka through the introduction of Inland Revenue Act 2017. 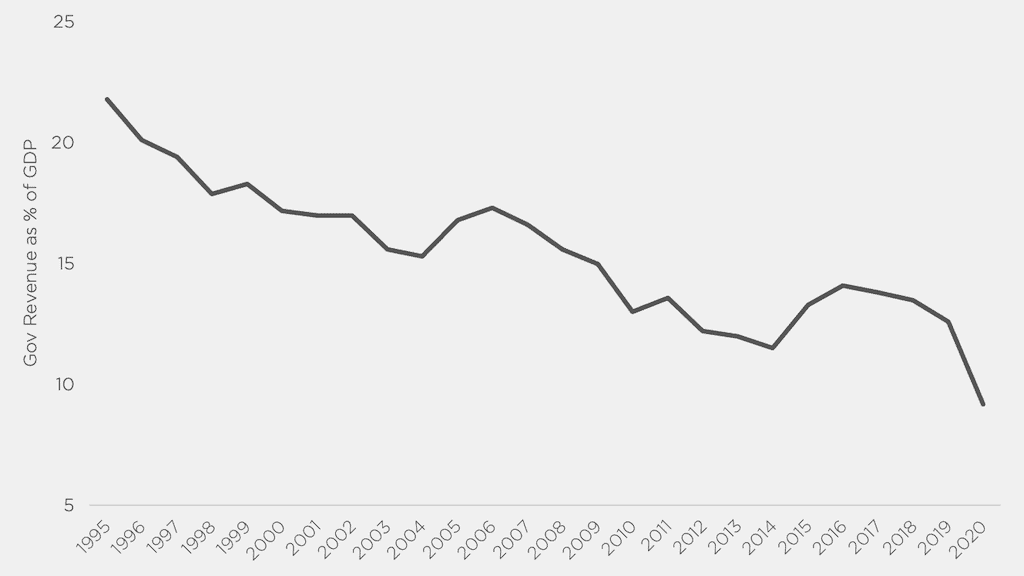 However, the reforms did not last long due to the policy changes influenced by political motives and lobbying. In 2019, number of tax cuts were introduced including significant reduction of income tax rates, reduction of Value Added Tax (VAT) rate, abolishing the Pay As You Earn (withholding tax mechanism that was in practice to collect tax from employees) and increase  of threshold for income tax and VAT. Finance Ministry data shows that these tax changes contributed to a significant revenue loss to the government. Accordingly, PAYE tax revenue was reduced by Rs.34 billion during 2020, while corporate income tax revenue and individual income tax revenue was reduced by Rs.46 billion and Rs.113 billion, respectively. The total income tax revenue drop in 2020 was Rs. 159 billion. To put it in perspective, in 2020, government expenditure on providing free medicine was Rs.83 billion while government investment on healthcare was only Rs.39 billion. That’s how big the income revenue loss was. The total tax revenue drop in 2020 amounted to Rs.518 billion, which is a reduction of 30% compared to tax revenue in 2019.

If the Sri Lankan government is committed to achieving sustainable growth in upcoming years, it is essential to put some serious effort towards increasing the tax revenue. As it sounds, it is a massive economic, political, and structural challenge. One such structural challenge is the large informal sector. In 2019, nearly 60% of country’s work force is in the informal sector; meaning that neither their income nor the income of businesses they are attached to, is recorded. The easy way out of this was to focus on consumption-based taxes such as VAT and import base taxes such custom tariff and para-tariff. This in turn resulting in less and less reliance on income tax to raise government revenue while increasing prices of number of essential goods.

This concern can be addressed through a longstanding commitment to develop the tax administration system, establishing mechanisms to reduce tax evasion, focusing on withholding mechanism in collecting taxes, reducing the exemptions for income tax and doing away with arbitrary tax concessions. These measures would ensure a substantial tax revenue boost driven by an increase of progressive taxation. Over the recent decades, Sri Lanka’s tax regime has been very regressive and only around 20% of total tax revenue is raised through income tax. Which means, most of the tax burden is already imposed on average citizens and further growth of tax revenue requires to come through the increase of income tax collection.

The tax reforms introduced through the Inland Revenue Act 2017 provide sufficient evidence to prove that reducing exemptions, increasing income tax rates, and focusing on an efficient withholding mechanism for collecting taxes can lead to a significant increase in income tax collection. According to the data, corporate and individual income tax increased by 60% (Rs.100 billion increase in numerical terms) in 2019 because of these tax reforms pursued following the new Act.

The essential prerequisite to make these reforms successful is making tax administration more efficient, taxpayer friendly and less complex. This should go hand in hand with streamlining regulations which adversely affect businesses and getting rid of the red tape. Complexity of number of existing regulations had adversely affected businesses, and sometimes even had led to bribery and corruption.

Increasing tax revenue and introducing tax reforms has never been easy. History suggests that in Sri Lanka, implementing taxation reforms keeps getting more and more challenging. However, with the current economic climate filled with many macroeconomic vulnerabilities, taxation reforms are no longer an option. Raising tax revenue is not only essential, but also an urgent policy commitment required to prevent an economic crisis in near term.

By 2020, Sri Lanka’s debt to GDP ratio has increased up to 101%. Such a high level of debt inevitably translates into a significant increase in debt repayments in the near and medium term. This means Government expenditure will escalate in the coming years, posing threats to economic stability. The Government will be compelled to carry out tax reforms, to increase revenue in order to contain the fiscal deficit and public debt. Failure to do so would drag the country into a serious economic crisis, sooner or later. The efforts to raise tax revenue must go hand in hand with other prudent fiscal management measures such as rationalizing government expenditure, reducing the SOE losses and providing targeted subsidies, and public debt management measures including reducing reliance on foreign loans, particularly commercial credit. None of these issues or suggested actions are brand-new ones; COVID-19 has only made them more acute and more urgent. Taxation issues in Sri Lanka have been longstanding. Constant warnings were often ignored for short term gains. Sri Lanka’s economic vulnerabilities are now worse than ever before. Therefore, progressive and comprehensive tax system is not merely an option, but an essential prerequisite towards an economic recovery that can be sustained in the medium to longer term.

Umesh Moramudali is a lecturer at the University of Colombo focusing on public finance, political economy, and economic development in Sri Lanka. He is a Chevening scholar and holds an M.Sc in Economics from the University of Warwick. He was formerly a research analyst at the Ministry of Finance and a senior research associate at the Ceylon Chamber of Commerce.