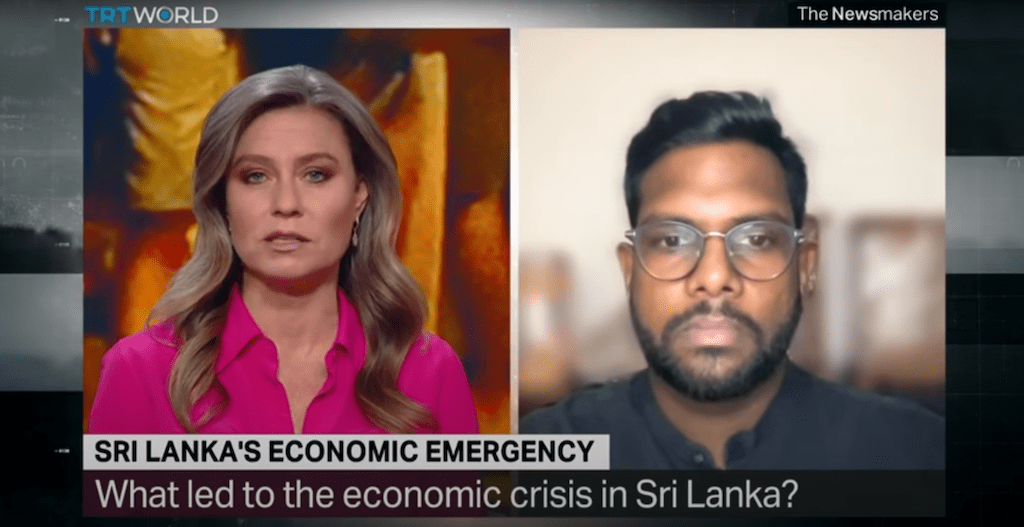 CSF Co-Founder Anushka Wijesinha was interviewed by Andrea Sanke of the leading Turkish global news channel TRT World, on their show ‘Newsmakers’ to talk about the ongoing economic crisis in Sri Lanka, along with history researcher Shamara Wettimuny, and activist Ruki Fernando. The full video is available here, and below, and the panel with Anushka starts at the 9’30” mark. During the panel, he recalled one of the turning points for the economy – the irresponsible tax cuts that led to the ratings downgrades and locking out of international capital markets – and the cascading policy errors and the false bravado that followed. He asserted that there was over-optimism about the recovery in exports, tourism, remittances, and FDI to help ease the balance of payments issues. He argued that while the structural problems with the economy will take longer to resolve, the immediate macroeconomic stabilisation needs to take centre stage and the IMF programme will be the first baby steps towards that, and avoid a sovereign debt default. In response to a comment by Ruki Fernando, Anushka noted that there needs to be a sensible fiscal adjustment plan, that gets the economy back on track but also provides income support to vulnerable households who are hardest hit.