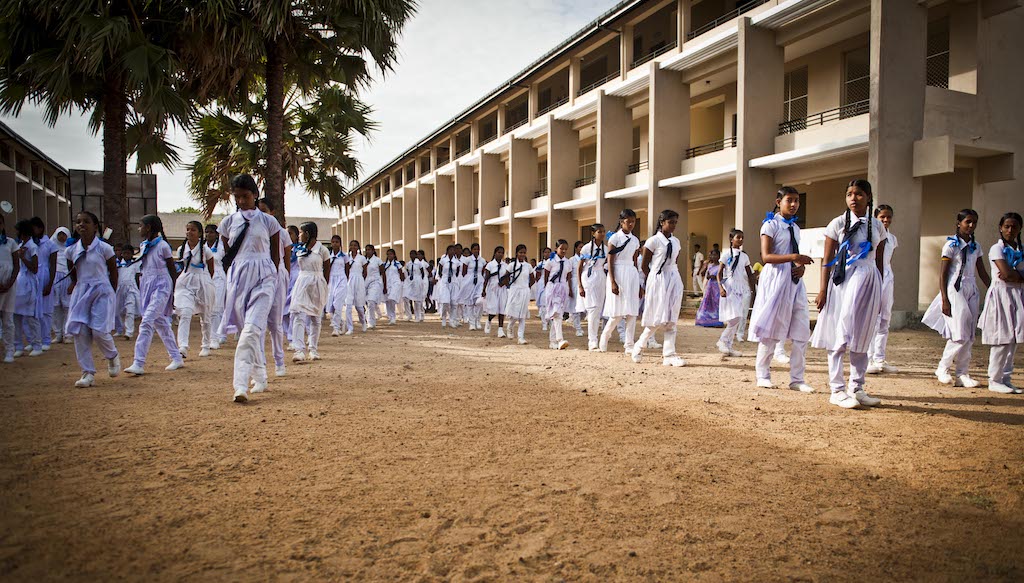 Sri Lanka is currently facing its worst economic crisis yet – an acute foreign currency shortage, looming debt repayments, high inflation and food fuel and medicine shortages. Islandwide protests have made clear the need for systemic economic and political reform. While some reform areas have gained more traction than others (for instance, the debt restructuring), the critical state that the education sector is in has received relatively less attention; and this risks Sri Lanka’s future growth prospects.

Education was already in crisis prior to the current economic conditions, due to the Covid-19 pandemic. During the height of the pandemic, Sri Lankan students (approximately 4.3 million students of them) were among the worst affected, with prolonged and repeated school closures. The Covid-era shift to remote learning was far from equitable, with internet-based education being limited to 45% of the total student population, and wide variance in internet connectivity and affordability across regions and population groups. This exacerbated socio-economic gaps and contributed to significant learning losses. While school-goers did experience some semblance of normalcy with the reopening of schools in the last few months, this is now being offset by the ongoing economic crisis.

The latest concern facing both teachers and students alike is that the surge in petrol and diesel prices has made transportation to and from school unaffordable. Over the past few months, fuel prices have sky-rocketed, with the price of petrol rising by 33.1% and the price of diesel increasing by a record 64.2%. In response to these price hikes, a collective of government school principals and teachers’ unions declared sick leave in late April, as part of a token strike. In addition to price increases, fuel shortages have severely hampered operations of school transport service providers, who spend hours in never-ending queues at fuel stations. The Ceylon Teachers’ Union (CTU) has warned that school attendance has been dropping sharply due the ongoing fuel shortages and high cost of transport, and observed that “certain students who come to school for just a day or two”.

A temporary solution to this issue was proposed by the CTU – to allow students and teachers to attend schools in closest proximity to their homes. While the solution sounds a creative one, in practice it seemed unlikely to work, due to disparities in quality of education across different schools. In other words, it may be difficult for students and teachers to seamlessly transition from one school to another, just for this short duration and in an ad hoc manner. The proposal was subsequently rejected by the Ministry of Education.

It is not just shortages of fuel, but also other imports that are affecting education. The lack of foreign currency to import essentials, and the sharp depreciation of the Rupee, have caused severe import shortages, including for printing paper. In March this year, education authorities announced an indefinite postponement of scheduled term tests, on account of the acute paper shortage in the country and the inability to print exam papers. This meant that there was an undue delay in the completion of relevant assessments, which time students could have used to pursue other academic/ extracurricular activities.

Fuel shortages have also led to shortages of electricity. Frequent island-wide power cuts have worsened the learning constraints being faced by Sri Lankan students, who are unable to complete their school work, iron their school uniforms and even at times get enough sleep due to long power cuts that last between six to ten hours daily.

The forex shortage and depreciation of the rupee (by over 30% by April) has also adversely affected those students pursuing their higher education abroad and at affiliate centres of foreign universities in Sri Lanka. As state-funded tertiary education is limited to a select few, many students pursue their higher education through private educational institutions. In most cases, tuition fees and examination fees at these institutions are required to be paid in foreign currency. Due to the current forex shortage, parents are scrambling to secure the requisite foreign currency to pay for their children’s tuition and examination fees. While some have resorted to any means available for such purposes, (including transacting in the black market) others with tighter finances, have been left helpless. Some students engaged in study abroad have had no choice but to halt their education and return back to Sri Lanka, while those studying in local foreign affiliate institutions have also had to cut short their academic pursuits, in light of sharply higher examination fees. The ability to pursue tertiary education, which was already quite restrictive to the few who got into state universities and those who could afford private colleges, has now become substantially more restrictive today.

As of 2018, government expenditure on education as a percentage of GDP was a meagre 2.14%. This figure is well below the crucial reference point proposed by the Education 2030 Framework for Action which requires an allocation of at least 4% – 6% of GDP on education. While there have been proposals to improve budget allocations to the education sector in 2022, there is no doubt that the now cash-strapped Sri Lanka will have other priorities. Under an austerity programme, the government of Sri Lanka may be required to make budget cuts, including those in the education sector. It is likely that the development of schools as proposed in the budget will not materialise, as the government cuts down on its capital expenditure as part of these measures.

Even so, the government must strive to formulate a comprehensive action plan that is student-centric, in order to revive Sri Lanka’s education system and help students and teachers manage the current crisis. According to global surveys, there is a tendency for many students to leave the country in search of better educational opportunities, in times of economic crises. If the government does not address the concerns of its students, and provide immediate solutions to their needs, the country will not only see an entire generation of young people affected by lower educational attainment in crucial development years, but also experience a severe brain drain in the years ahead. While the country tackles macroeconomic stabilisation measures, it is vital to tackle the education crisis as well.

Nimaya Dahanayake is a Research Assistant at CSF. She graduated in Economics and Management from the from the University of London International Programmes, and is currently in her 4th year at Law Faculty, University of Colombo. She is a member of the Sri Lankan Moot Court Team that qualified for the global rounds of the John H. Jackson Moot Court Competition to be held in Geneva.