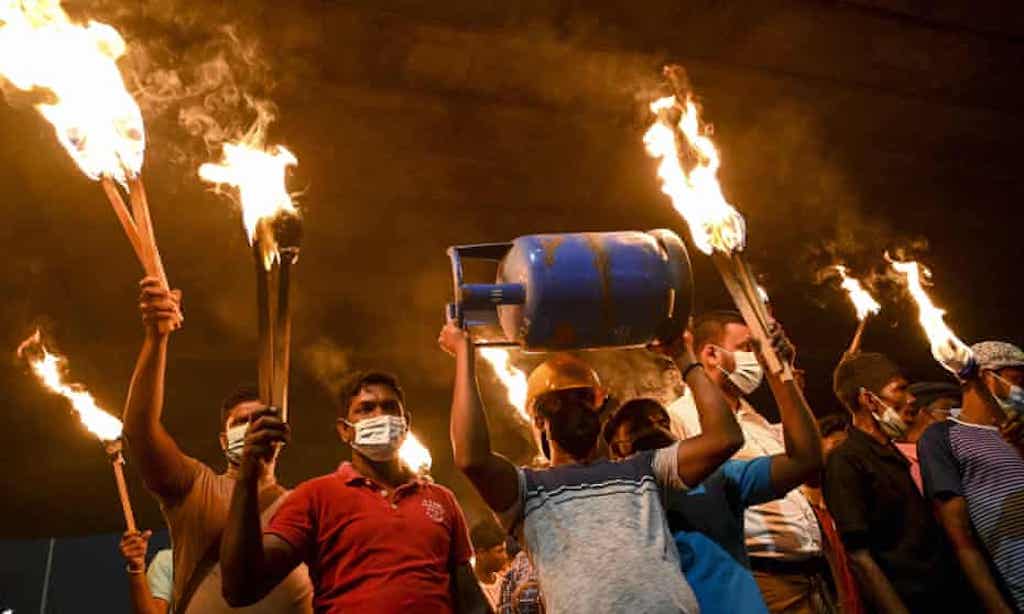 This article originally appears in the East Asia Forum (8th April 2022). The EAF is based out of the Crawford School of Public Policy within the College of Asia and the Pacific at the Australian National University, the Forum is a joint initiative of two academic research networks: the East Asian Bureau of Economic Research (EABER) and the South Asian Bureau of Economic Research (SABER)

Sri Lanka is facing unprecedented political turmoil, and with the economy in a tailspin it is in its weakest state in decades. The country is staring down the barrel of a sovereign debt default and is exposed to external shocks.

Usable foreign exchange reserves are at just a few weeks of imports (estimated at below US$200 million), and there are shortages of fuel, gas and electricity. Banks and businesses are short of dollars for trade transactions and households are struggling to get basic food items.

President Gotabaya Rajapaksa announced his request for support from the International Monetary Fund (IMF) in March 2022 as a precursor to pursuing a sovereign debt restructure. He has appointed a three-member group of eminent experts to advise him on multilateral engagement. Ensuring that the government can come to an agreement with the emergency lender — with political consensus and public acceptance — is crucial.

Political consensus around economic policies in Sri Lanka has always been elusive. In recent political cycles, economic reform agendas have been promptly reversed by the next government, resulting in policy whiplash and macroeconomic damage. This trend must be reversed. Political consensus in key reforms areas, such as fiscal adjustment, market-based pricing of energy, rationalising state expenditure — including state-owned enterprise reform and a halt on state sector recruitment — is essential.

For international institutions and investors awaiting Sri Lanka’s next step, the political turmoil of the last few days is troubling. In the face of public protests, the cabinet of ministers has resigned, forty-two MPs have exited the government, and the newly appointed finance minister quit a day after being appointed. Last month, three MPs begun shaping an anti-IMF narrative. One of them has even suggested that the IMF, and Western institutions in general, are responsible for the current crisis in Ukraine.

As calls for the president to step down have grown, there have been efforts to form an ‘interim government’ with ‘multi-party representation’. Given the divergent political views and economic ideologies among these parties, getting any form of political consensus on an economic reform programme will be challenging. Anti-IMF public posturing, party-led protests due to budget cuts and disagreements on the reform pathway risks derailing urgent macroeconomic stabilisation measures and undermines short-term restructure and reform efforts.

The Sri Lankan economy has been running on excessive money printing in the last two years. The Central Bank of Sri Lanka’s balance sheet and the role of the state in the economy has expanded.

Everything from construction firms to retailers of consumer goods have done well during this time. Inflation is now at over 17 per cent — four times that of two years ago. It is inevitable that an austerity programme will be implemented as part of an IMF bailout package and sovereign debt restructure.

The fiscal adjustment must be swift, sensible and sensitive to vulnerable groups. Budget cuts need to be prioritised in a way that doesn’t burden poorer households. As the leader of the opposition recently stated, ‘We have to cushion the less fortunate in society, we cannot have social upheaval just in the name of and for the sake of restructuring and reform’.

Non-urgent capital expenditure projects — notably, infrastructure construction — would be first to be deprioritised, especially amidst cost inflation controversies in projects like the construction of the Central Expressway. The construction sector has been a mainstay of economic activity since the end of the Sri Lankan Civil War in 2009. A cut back would see localised impacts on jobs too —many seasonal farm workers often take on jobs in these projects.

Taxes and interest rates must rise and spending needs to be curtailed. This will hit aggregate demand in the economy that has a large state role. Those who benefited from government stimulus payments will be hit hard.

Domestic political consensus on the core reform areas must accompany efforts to agree on a reform programme with the IMF that sets the stage for a sovereign debt restructure. The IMF and bondholders need assurances of political continuity. Any attempt to push through the reform programme without clear articulation of its rationale, expected outcomes, and measures to protect the vulnerable, will be met with resistance by politicians and the public.

The government needs to explain what the next year will be like, why the steps being taken are necessary and how it will help ease peoples’ economic pains. Ensuring that key economic decision-making roles are filled by individuals with credibility and competence is essential to building confidence in the government’s economic management and its ability to engage in productive dialogue with the IMF and international creditors.

The main risk facing Sri Lanka is the fallout of the current political instability on macroeconomic stabilisation efforts. Facing the prospect of a disorderly default, Sri Lankan officials have a decision to make — will they kow-tow to narrow political compulsions, or come together to agree on a common programme that steers the economy out of the current crisis and towards macroeconomic stability? Perhaps the current turmoil in parliament and the public’s growing recognition of the cause of the crisis will be what catalyses a political consensus for reform that has eluded Sri Lanka for so long.